- The Church of St Martin of Jebsheim, with Romanesque bases of the redesigned 12th century - Romanesque bell tower - tombstones of the Lords of Berckheim of the 14th-16th century - is one of the oldest Christian sanctuary of Alsace.

- La Croix du Moulin de Jebsheim: this memorial should recall the hard fighting that took place in the territory of Jebsheim, killing more than 900 people and more than 2,000 wounded (American, French, German, Austrian) from 25 to 30 January 1945.. 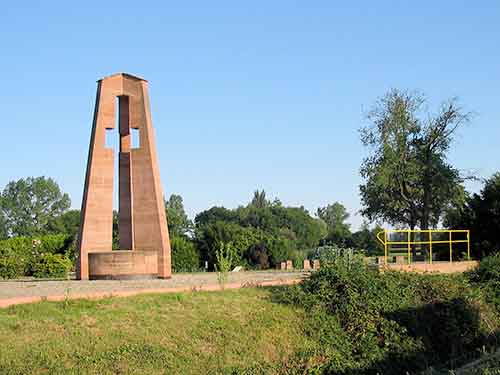 The Monument is a cross, represented by the void left by 3 panels of stone, one for each nationality of belligerents (France, Usa, Germany).

These 3 pink sandstone stone walls of Alsace are arranged in star on a circular pedestal and bear the name of the regiments who fought in Jebsheim.

The circular pedestal has the following inscription in 3 languages: THEY ARE ASSEMBLING IN DEATH, UNISSONS-US IN PEACE.

Purpose: without ever forgetting the past, to work for an understanding and reconciliation between the adversaries of yesterday, in view of a fraternally united Europe excluding new confrontations.
Strolls - Gone hiking

. Guided tour on a rowing-boat to discover both history and nature one the river Ill and its branches WWW.BATELIER-RIED.COM

. Canoe rentals for an outing on the ground-water rivers and discovery of the rich faun and flora http://alsacecanoes.free.fr

. the pagan Wall : for those who are keen on history and archeology http://www.mur-paien.fr

Inherited traditions:
. the Route des Vins (wineroad) (15 km) winding past typical and picturesque villages: Ribeauvillé, Hunawihr, Riquewihr, Kaysersberg, Eguisheim.
. Gastronomy out of the commun Let yourself be tempted by our traditional, regional cuisine and its delicious dishes: Kugelopf (risen pastry with raisins, baked in an eartheware mould)
, Baekeoffe (beef, pork and mutton, with potatoes, onions and leek baked in white wine in an earthenware dish), Choucroute (fermented cabbage cooked with smoked pork and saussages) Tartes flambées (very thin bread pastry with onion, bacon and cream on top, baked on an open fire), Coq au Riesling (cokked chicken cooked in white wine and served with a very savoury sauce).
. of the ability challenging the time in Muttersholtz (25 km) :
. the weaver : « TISSAGE GANDER » is the last enterprise to perpetuate the traditional texture of the Alsatian, cloth to basis of linen used traditionally for the decoration of the farmers houses in the Rhenish valley and the linen of house. http://www.tissage-gander.fr/
. the calfeutrier, manufacturer of boats flat-bottom

Nature and its heritage :
The word "Ried" stems from the alemanic word "rieth* meaning "reed, rush", and further, ""liable to flooding areas,
The grand Ried de l'Ill, (the large "Ried" of the river Ill), between Sélestat and the Rhine, is the largest in Alsace. Little known by tourists, it is charcterised by a dense network of ground water rivers, by alternative grass fields, reed and small oak and ash-tree woods.
The winter floods, characteristic in the Ried, present an amazing sight.
The faun and flora are rich and well-preserved.